This story was shared by our blog fam and it has been confirmed. Kindly read and share

Hi, I would like to tell you a story of an encounter with scammer on INSTAGRAM, I came across a post/advert on Instagram telling me, they are doing N500,000 giveaway on Instagram, N250,000 for two people and IPhone 6S as consolation price to five other people, I entered for the giveaway, wrote a sweet story, you know nah😂, back it up with sweet mouth. He said his former account was hacked at 64k followers, and he needs to regain it. So he opened another Instagram account telling us to follow that page that they are setting up some things on the real Instagram account. I did that, they said I should send a code to them on Instagram so as to verify my account, I did that. Later they Sha keep updating us, they even did another N15,000 giveaway before the N250, 000 own land. I was keeping my hope high thinking I will win the prices. Las las they Sha announce the winner of the N250,000, those ones too did their comment that they have seen it. I thought I have lost the money but I still kept my hope high that I can still win the iPhone 6S… They said they will delete that account they created for the giveaway because they have fulfilled their purpose with it. And they said they will contact the five winners of the iPhone 6S privately before morning.

Las las I was among the winner of the iPhone 6S…Only if you know how happy I was that early morning. I Sha reply them on Instagram. They said they stay in ZAITO PLAZA KEBBI STATE, that I should comman collect the price within 3 days or else it will be fortified, they already knew I can’t come down their because of iPhone, they said if I’m in doubt I should send a cab to their office.. Bla Bla Bla…. We Sha conclude, they said I can also pay delivery fee of N2950 which I finally paid, I paid it and send a screenshot of payment to them, that’s the END OF THE STORY!!!! Incase you don’t understand, I meant thru blocked me immediately not even up to 5 seconds.

They always do this repeatedly monthly or weekly and block you once they are done with you.

Here is their details below
1. First time I met them, they used sky_digital, now they used zenith_digital, I dunno what they will use next. Be wise!!

2. They usually say they lost their formal account when it has a high volume of followers.

3. They usually create another page for the giveaway. 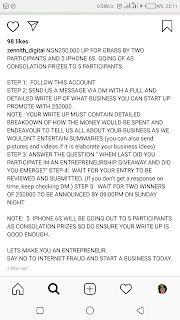 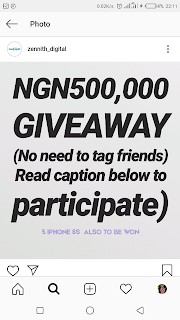 Here is their account numbers below, Abeg don’t pay to this account wherever you see it. They are scammers.

That’s the end of it as narrated by a fam, Be careful of who you send money to. People are using social media as a medium of scam.
Thanks.