Tina Knowles danced the night away with her ‘babies’ on Wednesday.

The 64-year-old star shared a cute Instagram video the following morning showing her on the dance floor during the Boo Bash Halloween party.

Beyonce, 37, dressed as 1980s Olympic sprinter Florence Griffith Joyner in a pink bodysuit beamed a big smile as she bopped to the music alongside her mom.

Tina, 64, looked sensational as Foxy Brown wearing a tan cat suit with keyhole cut out on the chest.

The duo danced to Lil Duval’s track Smile before Bey’s sister Solange joined them for a dance after a little coaxing from Jay-Z who could be seen next to Kevin Hart dressed as a Minion. 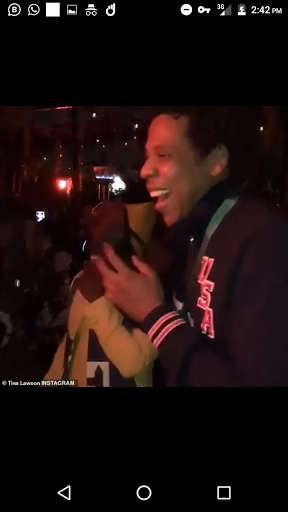 Tina captioned the fun clip: ‘At the Boo Bash last night with my babies @saintrecords @beyonce @angiebeyince This was pure joy for me missing my Kelly on here tho #tinasangels left to right Kate Moss , Foxy Brown, Flo Jo , and Geisha Girl’.

Earlier in the day Beyonce showed off her incredible costume on social media which consisted of a pink one-legged athletic unitard portraying the late track and field athlete Florence Griffith Joyner from 1988.

Jay, 48, also paid his respect to icons of the sporting world, as he channeled Tommie Smith during his legendary Black Power Salute – a symbolic protest against racism in the US – at the 1968 Olympic Games in Mexico City, alongside John Carlos.

Florence, who was lovingly known as Flo-Jo, is still considered as the fastest woman of all time as her world records still stand.

She tragically passed away at the age of 38 in 1998 after an epileptic seizure.

Meanwhile, at 24, Tommie won the gold medal at the 1968 Summer Olympics and used his platform alongside John Carlos to protest racism and injustice, which caused significant backlash.

Earlier on, Beyonce transformed herself into a spot-on impersonation of R&B legend Toni Braxton for her Halloween costume.

The icon delighted her nearly 120 million Instagram followers on Tuesday when she posted a series of photos stylized exactly like Toni’s debut album cover.