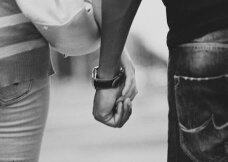 THE THEORY BEHIND REWARDING AND

Rewarding and punishing affects every aspect of a

woman’s feeling and attraction toward you – value,

investment, and attainability. The reason I’ve included it

rewarding or punishing a woman’s actions – and thus, her

kind of investment (or, in some cases, her lack of

investment). I don’t really like the term “punishing” and

what we’re doing with women isn’t exactly that per se, but

for the sake of explanation it’s the best term we can use,

so I use it here, with some reservation.

The basic premise of rewarding and punishing is that you

want to encourage and reinforce things you like and that

are good for your interactions that a woman does around

you, and discourage things you don’t like and that are bad

for your interactions that she does. It is a very simple

concept. If a woman does something good, reward her; if

she does something bad, discourage it. Except in reality

men do not always correctly execute this.

What do most men do when women pout and complain?

complains about wanting them to do. What does a woman

learn from seeing a man respond that way to her pouting

and complaining? What she learns is, any time she wants

something from her guy, all she has to do is pout and

from his woman after he does what she asks… or more?

The answer’s pretty obvious. People figure out what works,

and they use it. In this case, the woman acted in a

negative manner, and the man gave her what she wanted.

Rather than punish for negative behavior, he rewarded and

In an ideal world, men would reward women who do nice

things for them. But do most men do this consistently?

Not really. Think of a man whose girl does something really

nice for him – she dresses up very nice one day, or cooks

him a meal far more extravagant than usual. What does he

do? Maybe makes a little comment: “You look great today,

even go that far. Think she feels like she’s been truly

appreciated, or feels a swell of good feelings that might

make her want to do it again?

But what if when his girl dressed up, a guy told her she

looked absolutely gorgeous and elegant, and told her

exactly what he liked about her outfit (the style of the

dress or the way her hair was done), then took her

passionately to bed? Think she’d want to dress up well for

With an ex􏰀girlfriend of mine, when I’d go to her place,

she’d cook me really good food. And I wanted to say

thank you to her and make her feel good, so I’d take her

to bed and give her an amazing night right after. Well, she

came to expect this, and I guess reasonably expected that

the more and better food she gave me, the better a night

she’d get. So one night I came over, and she prepared me

an absolute feast. One of the best meals I’d had – really

tasty bread as an appetizer with loads of butter, some just

amazing chicken, great potatoes, and a giant slab of this

decadent chocolate cake for dessert (I have a weakness

for desserts), with a few big scoops of ice cream on the

side. Afterward, I looked at her and said, “Baby, that was

stared at me and firmly said, “Not yet… not til I get my

women – one based on rewarding good behavior and

bringing good feelings and happiness and helping each

other feel great into a relationship. It’s how you get women

investing themselves and building devotion and developing

a personal stake in a relationship.

Rewarding and punishing are absolutely crucial to

progressing not only in relationships, but in seduction. If a

rude and unpleasant things and he just lets it slide, she’ll

chasing after her, supplicating to her, and trying too hard

to get her. In other words, a man like that is letting things

pass that a stronger man never would. And, on the flipside,

if she feels unappreciated by a man she’s getting to know,

man who can make her feel excited, approved of, and

HOW TO REWARD YOUR GIRLFRIEND FOR

There are several ways to reward a woman for behavior

.Giving her more attention: focusing your eyes more
intently upon her, leaning in more to listen to her,
opening your body language, or facing her with more

of your body. This is used especially if she says

something interesting or very positive in a

Complimenting or qualifying her on things you like: It’s

good to point out qualities and attributes you like in

women. Even if she shows them only intermittently,

make sure to compliment her on them when you do

see them so you encourage her to show them more

frequently. For instance, if a woman seems distracted

during the initial part of your first meet, then perks up

and gives you more attention, you might tell her a few

minutes in, “I like how attentive you are, it’s

refreshing.” (note: the reason you wouldn’t tell her

immediately is that you don’t want to seem to be

reacting to her actions)

Giving her physical affection or stimuli: if a woman

says something engaging, humorous, or does

something nice, like buys you a drink or offers you

some of her food, always take the opportunity to

touch her as you thank her. Touching her does a lot

of good things, including letting her know that you

really do appreciate her, while communicating that

your touch is a good thing and something that is

earned through good behavior by her (important later

for when you want to become intimate – far better

that she views touching you as a reward than as

There are others, but those are the three most effective

ways of rewarding. Rewarding is something

this naturally. But it’s just like managers running a business

make mistakes; they build up and reinforce when

employees do a good job. Aim to be a good manager of

HOW TO PUNISH YOUR GIRLFRIEND FOR

Punishing is a bit of a touchy subject. You obviously never

for her actions – she’ll view you as calculating, and hence

manipulative. But you won’t be doing anything here that

women don’t do themselves to men. They picked this

behavior up through years of socializing and relationships.

Eventually it’ll become second􏰀nature to you and no

longer something you think consciously about – I

personally wouldn’t even define what I do with women

anymore as rewarding or punishing, I just tend to get the

kind of behavior I want these days – but for now, while

you’re still learning this, you’re going to have to

One very important note: punishing must never come off as

reactive, and must never come off as over􏰀the􏰀top.

woman’s negative behavior (unless it’s really bad; use your

judgment); rather, you want to communicate that you don’t

have time for unproductive behavior. The word “punishing”

itself is perhaps a little too strong 􏰀 what we’re really

Below, you have the two primary ways of doing just that:

rude / crude jokes about you, or begins implying that

you’re not good enough for her, or starts talking about

lots of different men chasing after her – get bored.

Give her less of your attention. Let your eyes drift

away slightly and glaze over. Slowly lean back in your

seat. Let your interest start fading out and pulling

away. It’s important to seem subtle and not overly

demonstrative – big demonstrations, such as turning

one’s back, often come off as overblown and childish,

and women will only react to them as entertainment

value, rather than the actual fear of losing you. This is

adept – once you become more of a social veteran,

you must steer yourself toward ever increasing

Being dismissive: when women say things you don’t

like, it’s okay to be dismissive and change the topic.

For instance, if a woman is telling you about her

ex􏰀boyfriend, then suddenly tells you she thinks all

“[sigh] Only the ones that live in barnyards. So anyway,

what happened after your found out your ex had

another girlfriend?” I also call this “steamrolling”, as

in, “She started saying things that were moving us in

the wrong direction, so I steamrolled them and

moved us back onto something more productive.”

Punishing is important just for the sake not only of showing

a woman you have limits and discouraging negative

behavior from her, but also for keeping things on

track. Women can easily be sidetracked by a negative

emotion that crops up that may have nothing to do with

you – for instance, the two of you may be discussing her

past relationships, and she starts talking about a bad

generalizations about men. That’s something you want to

discourage quickly, then thread cut and move on from.

Letting her dwell on that will only make her start feeling

negatively toward you, so it’s important to discourage it

quickly and move in a positive direction.