The Senator representing Delta North in the National
Assembly, Peter Nwaoboshi, has disclosed that his
persecution by the Economic and Financial Crimes
Commission (EFCC) is because of his position and stand at
the National Assembly. 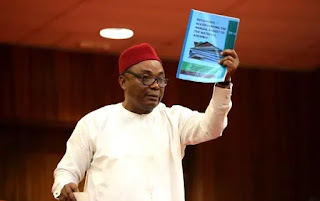 JOSHSPOT recalls that Nwaoboshi was recently arraigned
before the Federal High Court in Lagos for offences
bordering on money laundering and conspiracy.
The Senator, who doubles as chairman of the Senate
Committee on Niger Delta Development Commission
(NDDC), stated that the issue that led to his being arrested,
detained and arraigned in the court by EFCC had nothing to
do with fraud and corruption.

Nwaoboshi disclosed this when leaders and members of
Ibusa Community Development Union (ICDU), Asaba branch
paid him a solidarity visit over the weekend.

National Assembly since he did not launder money.
“If anybody thinks he can muzzle me or cow me, he is
wasting his time because I can never be cowed, I can never
be intimidated and I believe that justice will be done, I
believe in God and I will be vindicated at the end.
“I want you to have rest of mind. I never laundered money, I
am a pure business man. My company is paying the loan,
servicing it. When we finish the matter, Nigerians will know
whether money borrowed from bank and guaranteed is a
laundered one.

“I am sincerely overwhelmed by the gesture from our town
while I was with EFCC. Now, it is clear that we are becoming
more united,” he said.