A senior engineer with an Information and Communications
Technology company, identified as Adebayo Akinwunmi,
was on Sunday shot dead by suspected robbers.

It was gathered that the victim was killed around 1 a.m. on
Sunday, May 13 around Madam Felicia Street, Orimerunmu,
Ofada-Mokoloki, in the Obafemi Owode Local Government
Area of Ogun State when a four-man gang attacked the
community.
An eyewitness, who pleaded anonymity, told Punch that the
four men suspected to be robbers scaled the fence into the
engineer’s house. 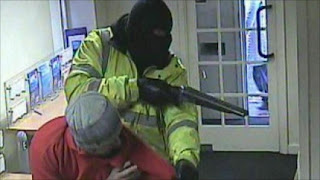 He said, “They were four in number and did not wear any
mask. The man’s wife was sleeping when they shouted
through the window that the family should open the door.
They showed their guns and threatened to shoot.
“The man asked the wife to stay in the bedroom and
assured the robbers that he would open the door. He was
about to open the door when the men, who had become
impatient, broke the door with their legs.
“As they were querying the man for being sluggish, the wife
came out and started begging them.
“They asked the wife what they had and she gave them their
ATM cards, phones and laptops.
“One of them just shot the engineer in the rib. Others
queried the man for shooting him and they hurriedly left the
apartment.

“They led the wife out and asked her to open the gate and
find someone that would take the husband to a hospital.
They asked her not to shout.”
It was learnt that the wife of the deceased immediately after
the raid contacted the sister-in-law, got a vehicle and took
her husband to a private medical facility in the area.
He was reportedly rejected at the hospital as the doctors
allegedly demanded a police report for the gunshot injuries
after which he gave up the ghost.
“We were finally referred to the Lagos State University
Teaching Hospital, Ikeja, we were told that there was no
surgeon to attend to him due to the ongoing strike actions
of medical doctors in the country.
“Because there was nobody to attend to us, he gave up at
LASUTH. He would have marked his 41 years birthday on
May 29, 2018.

“This is the fifth time that the robbers would attack their
house. The previous times, the robbers burgled the house
when they were not at home. This was the only time they
met them at home,” a close family member stated.
The state Police Public Relations Officer, Abimbola Oyeyemi,
confirming the incident said the police were on the trail of
the suspects.
“It was an unfortunate incident. The state Commissioner of
Police, Ahmed Iliyasu, has deployed men of the Federal
Special Anti-Robbery Squad in the area. We have enough
clues and very soon, we will bring them to justice.

“In fact, men of the FSARS are closing in on them as we
speak. This kind of crime has never been perpetrated in
Ogun without the assailants being arrested and this will not
be an exception,” PPRO Oyeyemi said.