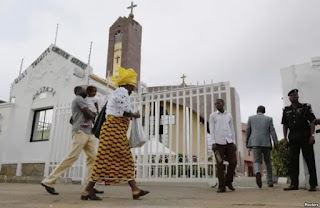 There was pandemonium in Enugu, the Enugu State capital,
after an explosion rocked Holy Cross Catholic parish, Iji-Nike
in Enugu-East Local Government Area.

He said that the sound shook the church, leaving the
neighbourhood in a state of confusion, while parishioners in
the premises scampered for safety.
The Catholic Bishop of Enugu Diocese addressing newsmen
in the state described the incident as worrisome and called
for vigilance.
He said that athough the explosion was minor as police
described it, it would have caused a stampede if it had
exploded at the time the worshippers had filled church.

“Those behind the act to desist from further action,
government and security agencies should please do
something fast before such incidents get out of hand,” the
Bishop said.
Police spokesman Ebere Amaraizu, confirmed the explosion.
Amaraizu described it as a minor explosion, urging people
not to panic.
“We thank God that there was no loss of life nor major
destruction. We have to be more vigilant and security-
conscious and be able to partner with security agencies to
ensure that there is no repeat of such an incident,” the
spokesman said.

Amaraizu added that the police had already commenced
investigations into the incident.