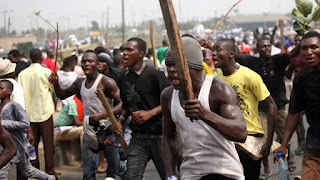 No fewer than seven persons were alleged to have been killed in the early hours of Thursday in Oleh and Ozoro communities of Delta State over protracted land dispute. It was gathered that the victims were alleged to have been engaged in gun battle over 3,000 parcels of land after a peace meeting to resolve their differences prior to the fateful day failed. JOSHSPOT gathered that elders of Oleh community had threatened to get to root of the land dispute, and overtimes deplored “War Lords” to the lands to stop any attempt for encroachment. But an elder’s statesman in Ozoro community, Chief Oboreh David told JOSHSPOT that the people of Oleh were causing unnecessary confusion, adding that the 3,000 parcel of land belonged to Ozoro. He said, “We Ozoro community own the lands, what Oleh people are doing is to take laws into their hands, we will not give up in the fight even though seven persons have died”.

Speaking to JOSHSPOT, a spokesman for Oleh community, Chief Alex Adeh said; “We will not fold our hands watching the people taking our lands, it is our property we will not release it to anybody, the lands have covering papers since 1946, and we will not allow any encroachment” But the Special Adviser to the Governor, Chief Edwin Uzor told JOSHSPOT that at a “Joint meeting with representatives of Ozoro and Oleh communities on the boundary dispute held at the Isoko Development Union Secretariat Oleh, the meeting was aimed at ending the land dispute, adding that some miscreants who had been fuelling the crisis allegedly sponsored a fight which saw everybody at the meeting taking to their heels. According to him; “Peace in all parts of the state would attract investors for increase economic growth”, and enjoined both communities to sheath their swords, and let go of all grievances. He expressed the need to nip the crisis in the bud, and called on leaders and youths to key into Dr. Okowa’s Peace Agenda for sustainable development, describing Isoko nation as an entity but split to attract more development and empowerment.