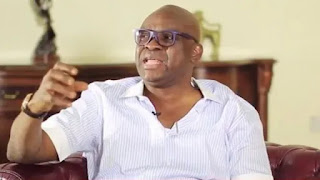 Governor Ayodele Fayose of Ekiti State has reacted to the decision of a governorship aspirant, Prince Dayo Adeyeye, to dump the Peoples Democratic Party (PDP). Adeyeye had lost the chance to become PDP’s governorship flag bearer to Fayose’s deputy, Kolapo Olusola during the party’s primary election. Against this backdrop, the former PDP’s National Publicity Secretary, on Thursday quit the party. Reacting to Adeyeye’s exist, Fayose said, “We appreciate him for the time he has spent, for participating in the primaries. “PDP has demonstrated to the whole world that we can offer a level playing ground. “We have given a level playing ground to everybody and to every election, there will be losers and winners.

“I am Peter the rock nobody can fight me. I have given everybody a level playing ground which actually no sitting governor will do. “Having done the best in these circumstances, I leave everything to God. But I want to assure you that his departure will make no difference. “To our teeming party members, I advise that this party has lost elections two times before. One to ex-governor Adebayo and another when Fayemi became governor. The party is more important we should stay together to win the election.”