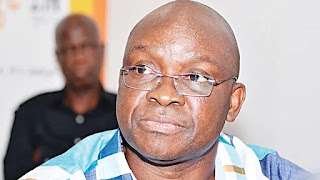 Governor Ayo Fayose, in what appeared like a mild drama has held prayer session against the All Progressive Congress (APC) in the state, asking God to further put confusion into the proposed Saturday primary of the party.. The governor held the vehement prayer session with a mammoth crowd of party supporters and people of Ekiti in Ikere hometown of Eleka, on Thursday as the crowd gave a rousing reception for the Peoples Democratic Party (PDP), governorship candidate, Professor Kolapo Olusola Eleka as he arrived from Abuja yesterday evening. The excited crowd prayed against the opposition party and asked God to give PDP victory over other parties. This was also as Eleka promised strongly to ensure that Ekiti witness an unprecedented development during his tenure as governor when voted in. Eleka said: “We appreciate our amiable and indefatigable governor. The man who has for the first time in this country stood solidly behind his deputy, openly and transparently, to ensure he emerges the party’s candidate in order to be his successor. We will forever be grateful and we will retaliate with our votes. “I want to assure you that all the good things that this government has been giving to Ekiti will continue in my tenure.

I want to assure you and the Ekiti people that , by the grace of God, I will not let you down. For the people of Ekiti, your welfare will be paramount to our policies in government. I want to assure you that during my tenure, Ekiti will witness unprecedented development in all sectors.” The mammoth crowd shut down Ikere Ekiti in a welcome reception for Eleka who returned from Abuja where he had gone on Wednesday to get the party’s certificate of return as governorship candidate.