The Senator representing Enugu North Senatorial Zone at the
National Assembly, Sen Chukwuka Utazi has identified
Ifeanyi Ugwuanyi, the Governor of Enugu State, as the best
man from the South East to become Nigeria’s President. 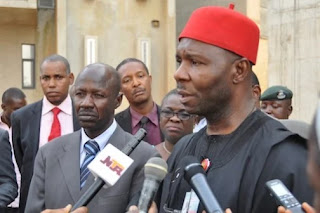 Senator Utazi, who was speaking at a Civic Reception held
in honour of the Governor by Aku Community in Igbo-Etiti
council area of the state on Saturday, noted that Hon
Ugwuanyi has demonstrated capacity and enough leadership
prowess as the best performing governor in the entire south
east.

According to him, “No other Governor in the South East has
been able to match Governor Ugwuanyi’s performance. So
he is best suited to lead the country if the south east is
given the nod to produce the President come 2023.”
Earlier in an address, the Presidential General of Aku
Peoples Assembly, Chief Fidelis Ezeoyili, who commended
the governor for his developmental strides in the
community, announced that the community has endorsed
the him for a second term in office.
“We, therefore, congratulate your Excellency on your
numerous landmark achievements despite the hard
conditions facing the country as a result of fall in prices of
crude oil.

“Preparatory to this civic reception, we the good people of
Aku community took stock of your evidenced achievements
within the three years of your administration. We believe that
Aku is well protected in your Excellency’s hands and that
what is due to us will not be denied us.

“And having being satisfied in all respects, we do hereby
endorse Your Excellency, Rt Hon Ifeanyi Ugwuanyi for a
second term in office come 2019 General Elections,” he
said.