Governor of Imo State, Rochas Okorocha, has ordered the
arrest and arraignment of the committee members sent to
monitor the All Progressives Congress (APC) ward
congresses on Saturday. 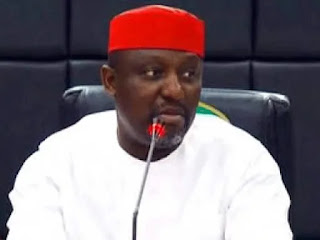 Okorocha took the action, despite the state chairman of the
party, Dr Hilary Eke and the state organising secretary, Dr
Clement Chijioke Anozie, rating the exercise as successful in
all the 305 wards in the 27 LGAs of the state.
In a statement signed by his Chief Press Secretary, Sam
Onwuemeodo, the Governor also charged the police to set
all machinery in motion for the arrest and prosecution of the
man at the centre of the ugly incident.
Okorocha also expressed regret over the role of Senator
Osita Izunaso, whom he said was not able to separate his
local and personal political interests from his official
responsibilities.
The Governor said the way he managed the situation saved
the state from “a very big crisis” it would have been thrown
into.