The online portal of the Nigerian Prison Service has been
temporarily shutdown, findings by JOSHSPOT. 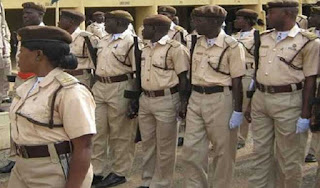 The development came barely one week after the Civil
Defence, Fire, Immigration and Prisons Services Board
(CDFIPB) invited applications from suitably qualified
candidates for full time appointments to fill existing
vacancies into the service.
Candidate were asked to log into the website
www.prisons.gov.ng fill and submit the application form
online. Applicants were also advised to print out the Referee
forms which must be duly completed for submission during
screening.

All applications are expected to be completed and
submitted within six (6) weeks.
However, a check on the official website of the service on
Sunday showed that the portal was unavailable.
The site had a short message on its homepage that reads,
“WE WILL BE BACK SHORTLY.”
Meanwhile, a quick tech check on the site by this reporter
shows that the site was created on December 25, 2008 by
National Information Technology Development Agency
(NITDA) and was last updated in August 2014.
When JOSHSPOT reached out to the Registrant, Agi Edegi,
he did not respond to our calls.
Meanwhile, the board is yet to explain the reason behind the
unavailability of the portal.