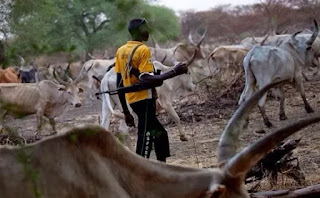 The Middle Belt Rights Congress, MBRC, has reacted to the
arrest of suspected notorious killer herdsmen, Idi Gemun,
Aliyu Teshaku and others by the Nigerian troops in Guma
Local Government Area of Benue.
JOSHSPOT reports that Idi Gemun was recently captured
by troops of the 72 battalion at the scene of the recurring
deadly attacks few days after the arrest of Aminu Yaminu,
aka Tarshaku, who was believed to have masterminded the
recent killings in the state.
Reacting to the development, MBRC called for the arrest of
those sponsoring killers in the middle belt states, especially
Benue, Plateau, Nasarawa and others.
Moses Ogaba Ochapa, who spoke on behalf of the group at
a press conference in Makurdi on Sunday, lauded the
Nigerian Army for the success so far recorded in the
ongoing operations to end the incessant loss of life and
property in the farmers/herders’ clashes in the north central
states.

Ochapa said, “These successes are crucial to ensuring that
the entire country does not get plunged into the chaos that
comes with food crisis since many farming communities are
unable to plant crops while demented killers rampage
through the land. Sustaining the tempo of the successes
being recorded by the military will see to it that agriculture is
not completely disrupted in our land.
“We cannot bear to lose our place as the guarantors of food
supplies in Nigeria to end up as people waiting for food
relief from donors.
“Even before the Nigerian Army recorded this breakthrough,
we had insisted that the killings in Benue state have too
many sick and twisted dimensions to them even though the
trend is to conclude that everything that is happening is the
handiwork of herdsmen. These recent arrests have now
proven that the problem is more complex than initially
thought.

“We commend the Nigerian Army for rising above the
distractions and unnecessary criticisms to embrace
professionalism that has yielded the arrests of these high-
profile killers and criminals. We commend the Chief of Army
Staff, Lt. Gen. Tukur Buratai for being steadfast and not
losing focus even amidst the barrage of attacks on the
selfless Nigerian Army by people who do not want the
killings in Benue and other states around it to end.
“It is pleasing that these arrests and disruption of the killing
network are being achieved while troops continue to act
within acceptable rules of engagement for such operations.
Our expectations are this would continue so that those
planning to defend the killers would be short of viable
excuses for their actions.
“ We however urge the Nigerian Army to sustain the tempo
of capturing the tormentors of Nigeria’s peace and bring
them to justice.

“Our appeal to the COAS is that the arrests should not be
limited to the militants with weapons. The political
components and sponsors of the so-called militia herdsmen
must be identified and taken in for investigation by the
appropriate branch or security agency. Anyone indicted in
such exercise must be made to answer for their crimes.
Going after the sponsors and the political components of
those that have flooded the Middle Belt with blood is the
only way to turn the tap off grief and misery off at the
source.
“The source of weapons that make these killers formidable
must also be investigated since law-abiding citizens are not
meant to be going around with such weapons of
destruction.”