The governor of Taraba State, Darius Ishaku, has described
President Muhammadu Buhari’s claim that Fulani herdsmen
don’t move around with AK-47 rifles but sticks and
machetes as false and misleading. 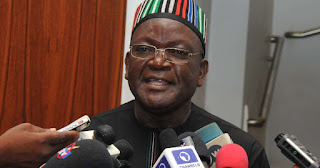 JOSHSPOT recalls that Buhari had made this claim during
his bilateral meeting with the President of the United States,
Donald Trump, in Washington DC, last week.
However, speaking to journalists in Abuja during the
weekend, the governor said that it couldn’t have been
imaginary that farmers were killed with AK-47 rifles in their
clashes with herdsmen in Taraba and Benue states.

“It’s absolutely wrong for the President to say herdsmen
don’t move around with guns. I mean, who then kills who? It
couldn’t have been imaginary that people have been killed
with AK-47 in the farmers-herdsmen clashes.
“We simply have to stand up to the truth and do something
to stop the killings,” he said.