Vice President Prof. Yemi Osinbajo, has declared that the
current administration will continue to arrest those who
stole the nation’s money.
Osinbajo also said the difference between the President
Muhammadu Buhari-led government and the past
administration is that the current regime that do not steal
public fund. 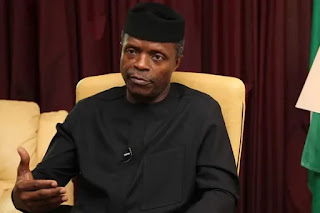 He said this on Thursday in Akure, Ondo State at the
inauguration of Small and Medium Scale Enterprises, MSME,
Clinic.
Osinbajo also took a swipe at the critics of the present
administration, describing them as being corrupt and
wanting to reclaim power by all means so as to continue to
perpetrate their corrupt acts.
He said, “The corruption is desperately fighting back so that
they can come back to power. God will make it impossible.
“We had access to lesser money than the previous
administration but what we had been able to do were far
more than what they did.

He said that the current administration had done more than
what the opposition PDP did in 16 years despite the fact that
government earnings have reduced by 60 percent.
Osinbajo pointed out that the APC-led government has
committed N1.3 trillion to infrastructural development since
they came on board.
On the criticism that nobody has been put in jail on account
of corruption the Vice President said “we will continue to
put them on trial even if court has not put them into jail.”
“This government wants to be honest with the people. The
difference between us and the previous government is that
we are not stealing public fund. All the project being
mouthed by the previous government begun,” he added.