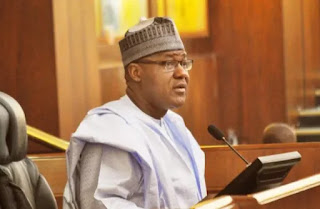 Yakubu Dogara, the Speaker of the House of
Representatives, has urged the police to prioritise the health
and safety of Kogi West Senator, Dino Melaye, who is in
their custody.
Sen. Melaye was arraigned for attempted suicide and other
charges at an Abuja court on Wednesday while lying on a
stretcher. Immediately he was granted bail in the sum of
N90 million by the judge, he was rearrested by the police
and transferred to Lokoja, Kogi State.

Consequently, a Senior Magistrate court 2 in Lokoja has
remanded Melaye in Police custody till June 11, 2018.
Reacting at Thursday plenary, Dogara, after a point of order
raised by Sunday Karimi (PDP, Kogi) where he urged the
house to intervene in the senator’s ordeals, said that he had
not seen any country where anybody, ”had been arraigned in
court on a stretcher.”

“I have not seen in any country where someone is arraigned
in court on stretchers when he or she is not fit to plead
guilty or not guilty. If anything happens to him, (Dino) the
responsibility will be on the security agency,” Mr Dogara
said.