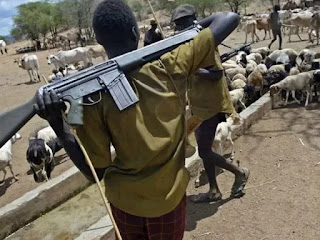 Gan Allah Fulani Development Association of Nigeria
(GAFDAN) has assured that it can put a permanent end to
the herders/farmers’ crisis in Benue State.
The group in a statement signed by its National President,
Alhaji Sale Bayari, accused other herders’ associations of
inciting and escalating the crisis in Benue through their
provocative, subjudiced utterances while the matter was still
in court, adding that “these have elicited threats and
reactions from tribal associations in Benue State.”
GAFDAN said, “Our association, having played no such role,
has the confidence of both the herdsmen, the security
agencies and the farmers, to intervene as a law-abiding
association to put out the fire, douse the tension, and bring
about lasting peace to Benue State and other states affected
by the bloodletting conflict.”

The group recalled the role its leader, Bayari played as the
secretary of the Sultan’s Tiv farmers/Fulani cattle Rearers
Relationship Committee under the chairmanship and co-
chairmanship of the Late Emir of Gombe, Alh Shehu
Abubakar. and the Late Tor Tiv, Dr. Torkula Akawe
respectively, which exhaustively addressed farmers/herders
protracted crisis by identifying and proffering peaceful
measures to the crisis.
“With this experience, the association believes that it has the
capacity to intervene and put in all the necessary measures
to ensure that peace and order returns to Benue and other
affected states.

“The monumental loss of lives and collateral damage of
property is unacceptable.
“If the crisis is not brought to an end, it could engulf the
entire country and results in ethno-socio-religious conflict
that politicians may inflame further to cause a national
upheaval,” the group added.