The Social Democratic Party (SDP) has announced May 10,
2018 as the date of the party’s governorship primaries ahead
of the July 14 poll. 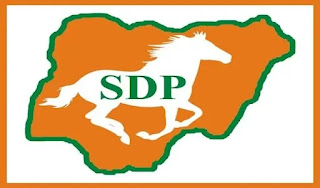 Among the contestants for the party’s ticket are Olamide
Oni, a serving member of the House of Representatives, who
defected from the APC to the party; a former deputy
governor of the state, Chief Adebisi Omoyeni, former
Ambassador to Canada, Chief Dare Bejide and Mr. Oladele
Ayegbusi, among others.

Engr. Bankole Oludele, the SDP Secretary in the state, who
announced this to newsmen in Ado-Ekiti on Tuesday, also
declared the readiness of the party to organize a credible,
free and fair governorship primaries.
He noted that the primary would be held at the SDP state
secretariat along Iyin Road, Basiri, Ado-Ekiti while the party
would flag off its campaign on May 15 and end same on
July 12.

He disclosed that the party was poised to displace the ruling
People’s Democratic Party (PDP) and the opposition All
Progressives Congress (APC) to win the July 14
governorship election.
His words, “If you follow the trend of events, we have about
six aspirants now. Let me say the aspirants had obtained
their party’s nomination forms, completed it and four of
them are on their way to Abuja to submit same.
“The primary election is coming up on the 10th of May,
2018. After the primary election, our party will now have her
own candidate who is going to represent the SDP in the
governorship election.”

The Ekiti SDP scribe explained that 5th of May had been
slated for ward congress to elect delegates who are to vote
at the primary while claims and objections are to be
received between the 7th and the 8th of May.
Describing the SDP as the “third force,” Oludele claimed that
the party has been receiving new members on daily basis
who believe in its manifesto.
He noted that the SDP manifesto incorporates agriculture,
education, road infrastructure and industrial development