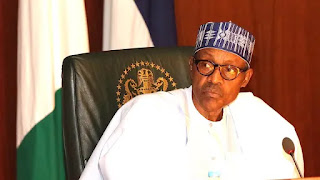 President Muhamamdu Buhari has once again declared that
most youths from the Northern part of the country were
either uneducated or abandoned school halfway.
The President said this in an interview he had with the
Voice of America, Hausa service, in Washington, United
States on Tuesday.

When asked about his reported comment on Nigerian youths
while in London for the Commonwealth Heads of
Government meeting, Buhari said the media only preferred
to report what they like instead of concentrating on
developmental journalism.
The President said, “You know they say we are over 180 to
200 million people in Nigeria and 60% are the youth below
the age of 30.
“In the North for instance, most have not attended school or
they abandoned halfway.
“If not because we had favourable rainfall in the past two
seasons; most of them have no jobs, just idling away.

“People like them, even if they go to the South for instance,
what they will make will not be enough to even pay their rent
not to talk of feeding, clothing, and transport back home.
“That has not been explained enough and you know the
media, especially the print, are simply doing whatever they
like.
“We had two successful farming seasons, people went to
the farm and did very well, but no one is talking about that;
only insults.

“That is why the Minister of Information, Lai Mohammed,
had to respond to the letter of insults released by Obasanjo.
We spoke about it and I asked him not to respond but he
refused and said he will just respond by stating the situation
we met the country, where it is now and what was done in
between and the monies we are getting.”

One thought on “MOST YOUTHS ARE LAZY AND UNEDUCATED – BUHARI”