President Muhammadu Buhari has admitted that his
administration still has a lot of work to do.
The President noted that his administration needed to build
on the gains it had made in fighting terrorism in the North-
East and in attaining peace in the Niger-Delta region. 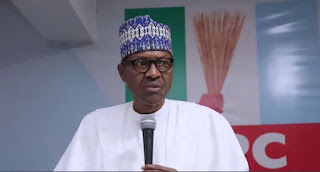 Buhari made this known in an opinion he wrote, which was
published by NewsWeek on Monday, to coincide with his
official visits to the United States where he met President
Donald Trump.
The Nigerian leader said climate change, amplified by
rapidly growing population, was another challenge his
administration was facing head-on.
“We are working hard to resolve these challenges – through
improved law enforcement, peace- building efforts and
necessary reforms in the management of our land and water
resources.
“Last December, Nigeria became the first African country to
issue Sovereign Domestic Green Bond to raise financing for
clean energy infrastructure.!

“Our commitment to restoring Nigeria to the path of growth
and development is not in doubt.
“I am enormously confident that we can continue to count
on the friendship and support of the American government
and people, as we work to fulfil our vision of a Nigeria –
Africa’s largest economy and most populous country – that
is secure , stable and prosperous,” Buhari said.
The President disclosed that in the last two years , his
administration had committed over $ 1 bn to upgrading road
infrastructure, adding that a significant infrastructure
initiative to modernise major national highways and
complete the development of a 3 ,050MW hydroelectric
power project had been established.

Buhari went further to explain that in addition to concession
arrangement with an international consortium, his
government had completed a $900m rail network linking
Abuja, Nigeria’s capital, to one of the key agriculture hubs in
the North; commenced construction of a $ 1 .2 bn standard
gauge line to facilitate trade and travel between the
commercial capital city of Lagos and two major cities in the
south ; and was set to inaugurate West Africa’s first intra –
city light rail projects in Abuja.

Buhari recalled that the US was one of the first countries he
visited after he was inaugurated as President in 2015.
He described the trip as a necessary one aimed at rebuilding
what “was at the time a troubled relationship” between the
two countries.

He added, “I am pleased to note the success of the
rapprochement; nowhere has the impact of this been more
visible than in the remarkable progress we have made, with
American support, in the fight against Boko Haram.
“Before my administration assumed office, the terrorist
group controlled an area the size of Massachusetts, New
Jersey and Connecticut combined.
“Today, they are a substantially degraded force, with a
capacity limited largely to cowardly attacks on soft targets.
“The Global Terrorism Index report for 2017 indicated that
the number of terrorism-related deaths in Nigeria attributed
to Boko Haram dropped by 80 per cent in 2016.

“An arms sales embargo imposed on Nigeria by the US
government during my predecessor’s time in office has
since been lifted. When President Trump and I spoke on the
telephone in February 2017, he expressed full support for the
sale of US- built A – 29 Super Tucano aircraft to Nigeria, to
boost the capacity of the Nigerian Air Force to respond
decisively to the threat of terrorism and banditry.
“That deal has now been finalised; I expect that we will
continue to enjoy similar levels of the US enthusiasm in our
security cooperation.

“Only two weeks ago , our two armed forces collaborated to
host in Abuja, Nigeria, the largest gathering of African Army
chiefs to discuss cooperation aimed at improving security on
the continent.”
Buhari said his administration came to office on the back of
a three- pronged agenda: “To secure the country, rebuild the
economy and to determinedly fight corruption – “the biggest
single threat to development and the prosperity of our
Nigerians.”