Peter Okoye of Psquare fame and legendary music producer,
Don Jazzy, are the latest celebrities to react to David
Adeleke also known as Davido’s expensive car gift to his
girlfriend, Chioma Avril.
JOSH SPOT reports that Davido had presented a porsche
car reportedly worth N45m to her on her birthday yesterday.
. 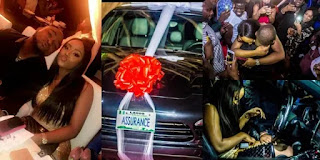 In his reaction, Peter Okoye otherwise known as Mr. P gave
kudos to Davido via his Instagram page on Tuesday, saying
he loved when men knew how to treat their women right.
“Nothing impresses me more than when a Man treats a
Woman right and makes her the center of his world. Nice
one @davidoofficial Congrats and Happy birthday Chioma.
#Goals #PureAssurance #LoveHasNoTribe
#LoveKnowsNoTribe,” he wrote.
Similarly, legendary music producer, Don Jazzy on his part
created a hilarious song and captioned the video with a
quote.
“@davidoofficial o boy una luv Dey sweet us like say na all
of us Dey chop chef chi food. Nice one bro. We sef go, love,
last last o,” he wrote..

Meanwhile, JOSHSPOT recalls that popular comedian, Ayo
Makun otherwise known as AY, in reaction to the expensive
birthday gift, had disclosed that he was blocking Davido on
social media so his wife doesn’t get to see the birthday gift
he got his girlfriend.