President Muhammadu Buhari » has reiterated that
herdsmen in Nigeria only carry sticks and
occasionally machetes to cut foliage for their cattle.
The President said this on Monday, April 30, 2018, in
Washington DC during the bilateral talk with U.S. President
Donald Trump . 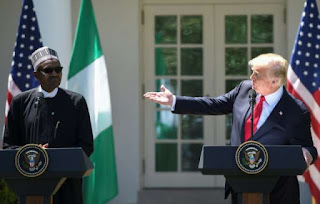 He again blamed the ongoing killing in Nigeria on the late
Libyan dictator Muammar Gaddafi fighters, who he said fled to
West African countries after Gaddafi’s death.
Buhari said, “The problem of herders in Nigeria is a very long
historical thing. The Nigerian herders don’t carry anything more
than a stick and occasionally a machete to cut down foliage
and give it to their animals, these ones are carrying AK-47.
“So, people should not underrate what happened in Libya. 43
years of Gaddafi, people were recruited from Sahel and trained
to shoot and kill. With the demise of Gaddafi they moved to
other countries and region and carried the experience with
them.”

The President also thanked the United States for its support in
the fight against Boko Haram insurgency and its efforts in
trying to get rid of terrorism across the world.
Anti-Boko Haram war
“We are grateful to the United States for agreeing to give us the
aircraft that we asked for. We are even more grateful for the
physical presence of the United States military officials in
Nigeria. Our institutions in Nigeria, for training them and going
to the Northeast to see how they are performing”, Buhari said.
“The commitment of the United States to get rid of terrorism
across the world, we have fast earned experience from that and
we are grateful for it.”
President Buhari was said to have arrived the White House at
around 12 noon on Monday. He was accompanied by Nigeria’s
Ambassador to the U.S. Sylvanus Nsofor , Ministers of Foreign
Affairs, Justice, and Trade and Investment, and Governors of
Plateau and Ogun.

Others on the delegation were Chief of Defence Staff, Maj.-
Gen. Gabriel Olonisakin , Senate Committee Chair on Foreign
Affairs, Monsurat Sunmonu and her House of Representatives
counterpart, Nnenna Ukejie .