Many feared dead as bomb explodes in a Mosque at Mubi
town , Adamawa.
The explosion occurred at a mosque in Wuro-Burode near
yan Gwajo part of Mini. 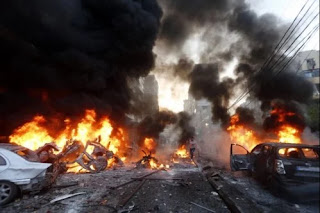 The blast occurred Tuesday afternoon while worshippers
were holding Zuhr (Afternoon ) prayer.
While details of the blast are still sketchy, residents and
local officials fear many worshippers were killed.
Head of National Emergency Management Agency (NEMA),
Yola operation, Abbani Imam Garki confirmed the blast to
newsmen in Yola.
He, however, promised to disclose details of the blast and
suspects responsible for the attack.