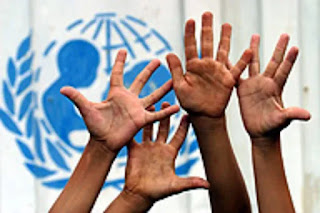 A civil society organisation, Coalition Against Terrorism and
Extremism, CATE, has demanded explanation from the
United Nations International Children’s Fund (UNICEF) over
its actions towards the activities of the Boko Haram sect in
Nigeria.

The group is demanding the UNICEF to urgently apologise to
Nigeria following its various allegations against the Nigerian
military, which it said had been confirmed to be false and
targeted at escalating terror activities in the country.
UNICEF had alleged recently that the Nigerian military has
raped over 20 girls in IDP Camps in Borno State.
The development forced the Nigerian Army to declare three
persons working for the agency persona non-grata in the
North East, Nigeria.
The three persons were: Priscillia Hoveyda, Maher Farea and
Milen Kidane.
CATE, while briefing newsmen on Monday in Jos, the
Plateau State capital, called on the agency to come clean on
the alleged nature of support they have been offering Boko
Haram, which it said it had revealed countless times before
now but authorities failed to act.
Onoja Gabriel, national president of CATE, who addressed
the press, urged the Nigerian Government to set up
monitoring committee to keep an eye on what groups like
UNICEF are doing in the country
His statement reads in full.

“Our decision to hold this event was informed that several
days after these troubling reports first surfaced UNICEF has
not satisfactorily cleared itself of the grievous revelations
that it has joined the organizations that are working for the
destruction of Nigeria.
“As a refresher, we invite you to recall how our organization,
the Coalition Against Terrorism and Extremism (CATE) had
risen up against groups that previously hid under the guise
of being International Non-Governmental Organizations
(NGOs) wreak havoc on our collective psyche and to
compromise our lives by overt and covert support for
terrorism. We alerted Nigerians in those dark days to how
certain organizations always timed their reports to coincide
with when the military was on the verge of dealing decisive
blows against Boko Haram Terrorists. Such reports
succeeded in several instances until Nigerians became wise
to this devilish antic.

“For the avoidance of doubts, the strategy was to
periodically release reports that threaten individual troop
and commander with the prospect of keeping a date with
the “International Criminal Court (ICC) for daring to fight for
the security of their country. At institutional level, the reports
destroy the reputation of the military services while on the
national level is damages the ability of Nigeria to partner
with allies thereby denying the entire country of the support
needed to defeat terrorism conclusively. In the time it takes
to repair the damage so done, Boko Haram terrorists would
have exploited the lag to regroup, re-arm and again become
deadly even when it had previously suffered defining
defeats.

“Nigerians, who realized the threat posed to their existence
and that of their dear fatherland, rose up to challenge this
international fraud. The Coalition Against Terrorism and
Extremism (CATE) was at the forefront of that struggle to
liberate Nigeria from the claws of these modern-day
imperialists hiding under NGOs. Let us quickly point out that
we were called names for standing up to the oppressors at
that time but we are encouraged by the renewed focus the
military had to fight terrorism once we successfully beat the
bullies out our land.
“Unfortunately, gentlemen of the press, the news we have
for you today is distressing because a new entity, UNICEF
has emerged as the latest replacement of all the evil
contraptions that were earlier deployed in the attempt to
incapacitate the Nigerian Military and strengthen terrorists.
The irony of this development is sickening considering the
noble role that this organization is ordinarily meant to be
playing.

“We have since learnt that people working for UNICEF have
in different countries and at different times usually lend
themselves and the name of the organization to be
deployed in undermining the countries on behalf of certain
international clients and client-nations. We however do not
want to conclude at this stage that UNICEF personnel behind
this latest attack on Nigeria do so without the knowledge of
the organization, for they would have been openly
sanctioned if this were the case.
Our sense of alarm was further heightened when we learnt
that this same group trickily rendered thousands of women
barren in Kenya using the lifesaving vaccination programme
to commit the crime. An organization that can exploit the
sanctity of vaccines to do evil cannot be trusted under any
condition and we do not even know what other damages
they have done to vulnerable people in our population that
they have worked with.

“The Coalition Against Terrorism and Extremism (CATE)
therefore demand an explanation over its role in the
escalated efforts to wrongly indict the Nigerian Military and
government for violating the Child Protection Act by cooking
up its Global Horizontal Notes (GHN) in a manner that will
deny the country of international support. We demand to
know why the atrocities committed by terrorists are being
attributed to government. They must come clean of the
nature of support they have been offering Boko Haram and
at whose behest.

“We warn in the strongest terms possible that CATE has the
wherewithal and network to mobilize the Nigerian civil
society to force UNICEF out of the north east if they fail to
offer plausible explanation. Our coalition will ensure this
happens except Nigerians can be convinced that UNICEF did
not commit the acts credited to it. The situation in the north
east is too fragile to have questionable people playing
international cowboys with our collective safety in Nigeria.
‘In view of the many instances of war entrepreneurs posing
as international NGOs, we call on the Federal Government to
set up monitoring committee to keep an eye on what groups
like UNICEF are doing in the country. This must be backed
with a periodic vetting of all NGOs in Nigeria and their
operations. The time when unmerited respect makes us
accept poison from international organizations is past and
there is no going back to such.”