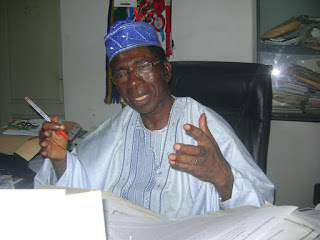 Former Minister of Education, Professor Tunde Adeniran has
stated that Nigerians will drive President Muhammadu
Buhari out of office in 2019.
Adeniran, a former ambassador to Germany and a chieftain
of the Social Democratic Party, SDP, told Vanguard on
Tuesday in Abuja that people would revolt with their votes
come 2019.

He condemned the All Progressives Congress, APC-led
administration’s handling of the mindless killings in parts of
the country.

According to him, “There is no doubt that President Buhari
has let the nation down in the handling of the security
challenges of the nation under his watch. He has
exacerbated and compounded the security situation in the
country in the last three years.
“Whatever his government does or does not do, as well as
their actions or inactions and bad policies, are bound to
have consequences. I see 2019 election as his terminal date
as the election will provide opportunity for the people to
drive his government out of power and install a credible
alternative.

“The spate of mindless killings in the country, which is not
in any way abating, will largely, contribute to the defeat of
this administration because the people of Nigeria have
totally lost faith, trust and confidence in the APC to provide
security of lives and property, which is the primary
responsibility of government.
“It is rather unfortunate that President Buhari has
demonstrated very low capacity in providing the essential
leadership that could hold Nigeria together. He has clearly
shown that he is not the father of all parts of Nigeria as he is
expected to be, and cannot provide security for all citizens.
“It has been seen so far that he lacks innovative ideas that
can grow our economy. He has by all these and many more
given the electorate enough reason for him to be roundly
rejected in the coming election.

“No matter what he does to circumvent the electoral
process, he will certainly be shown the way out in 2019
because he can no longer be trusted.
“There is the widespread fear that with him as President any
further than 2019, the country will definitely go under. But
God will not allow that to happen to us, because Nigeria is
God’s own country.”