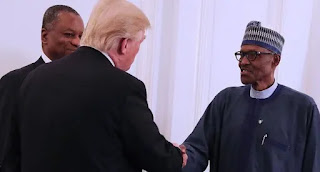 There’s been a lot of back and forth on social media
over whether President Muhammadu Buhari would
be the first African leader to be hosted by US
President Donald Trump in the White House.
The debate stems from press coverage » of the visit and
official statements from the Nigerian presidency.
For instance, the Associated Press writes that: “After more
than a year in office, President Donald Trump for the first time
is hosting an African president at the White House. The meeting
with Nigerian President Muhammadu Buhari on Monday comes
after an uncomfortable start to the Trump administration’s
approach to the world’s second most populous continent”.
J. Peter Pham, Director of the Africa Center at the
Washington-based Atlantic Council, told AFP that: “On
President Trump’s side, it’s definitely putting that (shithole
remark) controversy behind him.

“On President Buhari’s side, it’s having the prominence of being
the first African leader received at the White House in this
administration.”
Senior Special to Assistant to President Buhari on Media and
Publicity, Garba Shehu, issued a statement which contained
the following words:
“Buhari is the first African head of government to visit Trump’s
White House and this is a pointer to two important things. One
is, no matter how Nigerians take our own country, this is hugely
an important country and this recognition is being manifested
in this visit”.
Not a first

While it makes for good bragging rights and hyperbolic
storytelling to couch Buhari’s ongoing visit to the White
House » as a first, the truth is that it isn’t.
On April 3, 2017, Trump received Egyptian President Abdel
Fattah el-Sisi at the White House. The visit was tailored to
“reboot” a US/Egypt bilateral relationship that had been
strained at times in the past.
As both leaders met inside the White House and shook hands,
Trump said Sisi has “done a fantastic job in a very difficult
situation. We are very much behind Egypt and the people of
Egypt. You have a great friend and ally in the United States, and
in me.”
President Buhari is the second African head of government to
be received at the White House by Trump. There, we just fixed
it for everyone who has been running with that “first to be
received” tale.

Buhari’s bilateral meeting with Trump holds on April 30, 2018.
Trump and Buhari will discuss “ways to enhance the strategic
partnership between the two countries and to advance shared
priorities, such as: promoting economic growth, fighting
terrorism and other threats to peace and security.
“The meeting will further deepen the US-Nigeria relationship, as
the United States considers Nigeria’s economic growth, security
and leadership in Africa to be critical aspects of their strategic
partnership”, a statement from the Nigerian presidency read.