A Nigerian woman who got married to a man from
Saudi Arabia and gave birth to three beautiful
daughters has lost all the children within some few
minutes after her husband bloodily slaughtered them
one dawn. 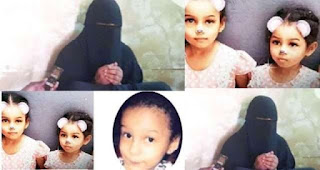 Fatima Mohamid Khalil said her husband woke the children up
early and when she enquired, he claimed the children’s
grandfather was visiting and he needed the youngsters to be
present and welcome him.
The man then took the children to a different room.
She became worried and followed up after some few minutes
to ascertain what was going on » , and to her surprise, the
husband had already killed two of the children.
She said all attempts to restrain the man from murdering the
last one did not materialize. The man pushed her out and
accomplished his mission

The incident happened on Sunday in Al-Rawdah District,
Makkah.
Fatima who herself lost her two parents since infancy told the
Saudi Gazette that: “This was an unusual act, but when I asked
him why, he said that his father was coming to visit and that
his three daughters needed to say hello to their grandfather.”
She added: “I was shocked to see my middle daughter Rimaz
in his hands soaked in her blood after he had slaughtered her
with a knife. I tried to rescue her, but he pushed me away; I
fell down. When I got up, he had already slaughtered our
eldest and the youngest daughters.”
After the heartless act, Fatima said: “He went out as if nothing
had happened. I started crying and neighbours came, but it
was too late.”
The distressed mother also disclosed that the man had
earlier asked her to go stay with her grandmother for a while,
and she did.

She said the children were heard one day crying loudly and
“our neighbours heard their cries and informed the police, who
came and arrested him, but he was soon released on bail.
“He took me back to his apartment with our daughters the
night of the incident. This was just a few hours before he
committed his heinous crime.”
Reports say the man might be a drug addict, but it is
suspected that he must have committed the act out of
frustration.
Fatima said: “He did not pay the rent for three months and
was indebted to our grocer by more than SR800.”