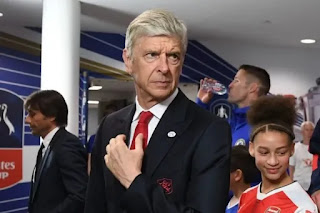 Arsenal FC will be playing today against Manchester United
in the Premier League at Old Trafford without some of their
key players.

English outlet, The Express, reports that Arsenal manager,
Arsene Wenger has dropped six Gunners key players from
the squad ahead of the crucial match against United in
order to rest them before their Europa League second leg
semi-final match against Atletico Madrid on Thursday to
avoid any fatigue or injuries.
The North London club drew 1-1 against Diego Simeone’s
men in the Europa League first leg semi-final encounter at
Emirate last Thursday

The report added that the disappointing result of the match
against Atletico Madrid, and the importance of the second
leg away from home in Madrid next Thursday made Wenger
drop several players from the starting Xl that will be playing
United.
The players are: striker, Alexander Lacazette, playmaker,
Mesut Ozil, defender, Laurent Koscielny, midfielder, Aaron
Ramsey, midfielder, Jack Wilshere, and defender, Shkodran
Mustafi.
Wenger’s men are currently occupying the sixth position of
the Premier League table with 57 points from 34 games.