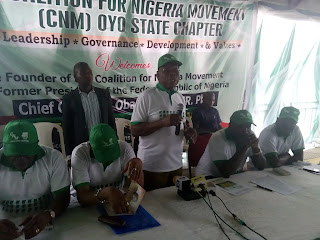 Former President, Olusegun Obasanjo on Saturday declared
that Nigerians should prepare their minds that it may not be
easy to change the present government of the ruling All
Progressives Congress (APC) under the leadership of
President Muhammadu Buhari in 2019.
Obasanjo made this declaration while speaking during the
launch of the Oyo state wing of Coalition for Nigeria
Movement (CNM), held at Trans Amusement Park, Ibadan.
At the launch were CNM National Coordinator and a former
Governor of Osun state, Prince Olagunsoye Oyinlola; former
Secretary to Oyo state government who is also the state
Coordinator, Chief Olayiwola Olakojo; Former Deputy
Governor of Oyo state, Ambassador Taofeek Arapaja and
former Secretary to Oyo state Government Chief Dele
Adigun.

Others are Barrister Ahmed Raji (SAN) and former
Chairman, Ibadan North East Local Government, Hon.
Ayinde Adewusi.
Obasanjo who is the CNM founder while speaking, urged
youths, women and Nigerians in general to prepare their
minds and not to be deterred in their bid to use their
Permanent Voter’s Cards (PVCs) to vote out the present
crop of leaders in the country in 2019, saying though it will
not be easy to effect the needed change in the country
because some people are out there to discourage them and
make jest of them.
The Ex-President while labelling the present government as
an elitist government that favours only the rich, urged
countrymen and women to safeguard their PVCs which he
described as an instrument of change in 2019 to elect those
who will have them in minds.

“But don’t ever think that it will be easy to change Nigeria in
2019. Ibi to ba le lanba Omokunrin ati Omobinrin nan. (It is
where that is hard that we see young men and women). And
some people are saying you are lazy, are you lazy? Nigerian
youths are not lazy. You see many Nigerian youths going
from Shaara desert to Libya to America. They are not lazy. If
the present youths enjoy half of opportunities and the
facilities we enjoyed and those that are calling them lazy
enjoyed, they will even do better than this.
“We can’t be repeating the same thing. And some people
are saying they should continue. Definitely those people
can’t be the friends of you people sitting here, they can’t be
friends of Nigeria.

“So let us start here, work has started, some people may be
making jest of you, don’t be deterred. So, make sure you
have your PVC, those that have not collected, go and collect
it and those of you that are yet to register, go and register.
The PVC is the instrument. Tell them from villages to
villages from towns to towns that PVC is the key we shall
use. I want to tell you not to be discouraged.
“As Oyinlola said, there are still some things he has not
said,

he said that we can only effect change when we transform
into political party. The philosophy we have in CNM and
what we will have in the political party will not be different.
We have not had a political party that is grassroots based
like this, what we have now is elitist. What we are saying is
that youths will be given 30 percent opportunity and women
will also be given 30 percent opportunity. I was Head of
State under 40. What we are saying is that youths must he
given a place in government”.