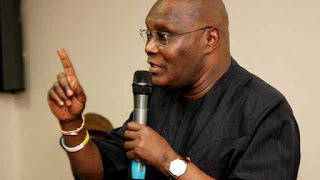 Former Vice-President, Atiku Abubakar, has said he will
probe the past administrations that failed to curtail the Boko
Haram insurgency, if he wins the 2019 presidential election.
The sect came into prominence during President Goodluck
Jonathan’s tenure and the incumbent, President
Muhammadu Buhari, is still battling with their continued
attacks in the Northern part of the country.
Speaking in an interview with BBC Hausa on Saturday, Atiku
said it is taking too long to defeat the Boko Haram
insurgents.

“Eight years after, Nigerian government is still fighting Boko
Haram that are not professionally trained.
“I want to be the president of Nigeria because I would be
able to do things I could not do as vice president. I will
investigate how the government was unable to defeat Boko
Haram for years. I will also investigate the procurement of
arms bought by this administration,” he said.
Atiku also vowed to tackle corruption, accusing the Buhari-
led government of shielding some people from the law.
21 Days Permanent Cure to STD’s like Staph, Gonorrhea,
Chlamydia, Herpes and other Infections – Click Here for
Free Info

“If Nigerians can recall, we initiated the Economic and
Financial (Crimes) Commission (EFCC). I’m the person that
sourced for the takeoff funds for the EFCC,” he said.
“In this administration, there are people who are
untouchable, they are doing things that are not in order but
they are being shielded by the government. If elected
Nigeria’s president, my administration will not spare
anybody. When I was in power, none of my relatives or
friends was found wanting.”