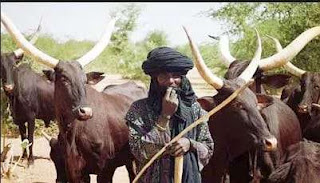 Three suspected herdsmen have been arrested and
paraded by the Nigerian Army yesterday, Friday,
April 28, 2018.
The suspects were reportedly arrested by the Nigerian troops
following intense gunfire exchange at Tormatar village in
Benue State.

The Commanding Officer of 72 Battalion, Lt. Col. Suleiman
Muhammad , revealed that the troops of the 707 Special
Forces Brigade in Makurdi, nabbed the trio while they were
planning further attacks on the state.
“Troops of the 707 Special Forces Brigade conducted a fighting
patrol on a suspected militia herdsmen camp located close to
Tormatar village on Thursday.
“The armed men were massing up for another possible attack
on innocent citizens in the local government area. On getting to
the militia camp, the herdsmen fired at our troops but the
troops immediately returned fire and dislodged them,” he said.
Muhammad gave the names of the suspects as; Abubakar
Umaru, Adamu Likita and Yusufa Alhaja.
According to the reports, one of the suspects was wounded
during the gun battle.

Two AK 47 rifles with six rounds of 7.62MM special
ammunition weapons were recovered from the suspects while
one AK47 rifle and five rounds of 7.62mm special ammunition
were also found in the bush in Naka village.
However, one of the suspects revealed to newsmen that they
had been grazing their cattle when they were handed guns by
their master and asked to run away with them after the
soldiers engaged them in a gun battle.
Nigerian Army arrest suspected mastermind of Benue attacks
The Nigerian Army said it has arrested a major Boko
Haram » suspect “believed to have masterminded most of the
recent attacks in Benue State.”

Th suspect, Aminu Yaminu also known as Tashaku, was said
to have been arrested Friday, April 27, in Makurdi, by a
combined team of troops of 707 Special Forces Brigade,
Nigeria Police and the Department of State Services.
The army disclosed this in a statement issued on Friday by
the Assistant Director, Army Public Relations, 707 Special
Forces Brigade in Makurdi, Olabisi Olalekan Ayeni .
“Following an intelligence report, it was gathered that Aminu
has concluded plans with his cohorts in Bauchi, Borno, Yobe
and Nasarawa states to launch a major attack on innocent
citizens in Benue State,” Ayeni said.
He said the Nigerian Army is working tirelessly to clamp down
on the criminals wreaking havoc in Benue.
“As earlier reinstated, Nigerian Army will ensure enemies of
peace in the state are brought to justice. Nigerian Army
encourages all law-abiding citizens to go about their lawful
businesses without fear,” he added.

The army also urged Nigerians to provide it and other security
agencies with timely information that could lead to the arrest
of criminals in the society.
Benue has been under attack since January 2018 when
suspected herdsmen massacred 73 persons.
The people of the state have been living in fear as the
herdsmen practically launch fatal attacks every week.
On Tuesday, April 24, gunmen attacked a Catholic church in
Gwer East Local Government Area of the state, killing two
priests and 17 worshippers.
Hours after, a community in Guma LGA was also attacked and
13 persons were killed.