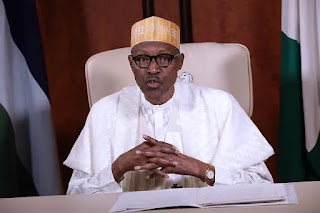 President Muhammadu Buhari has finally reacted to the
letter by former President Olusegun Obasanjo disparaging
his administration.
Obasanjo, in the letter, had cautioned Buhari against
seeking re-election, saying his government had failed
Nigerians.

In a swift reaction, Buhari’s spokesperson, Femi Adesina,
had said the president had ordered his aides against
responding to Obasanjo’s letter.

But, speaking during a state banquet in his honour on
Thursday night in Bauchi, the President said he initially
stopped the Minister of Information, Lai Mohammed from
responding but later allowed the Minister to react.
According to Buhari, “Tonight, I want to remind you people
of what Lai Mohammed did when a letter was written on our
failure as an administration. Lai Mohammed was agitated
about replying, but I said no.
“I said no for two reasons: one, he is much younger than the
person who wrote the letter and myself; two, he is from the
same constituency as the person who wrote the letter.

“But when Mohammed came again, I said he should go out
but he said he won’t go. I asked why and he said, let me
give him a chance to say what he wanted, then I said go on.
“He said in what he would do, he would not mention names
but only try to remind Nigerians what the country was when
we came in, where we are now, and what we have done with
the resources available to us.

“Eventually, I had to admit that he was right and I was wrong
because a number of people who could get in touch with
me have said that Lai did a good job. A lot of them are in
the media… I am very happy with the performance of our
party, the All Progressive Congress.”