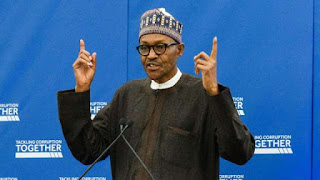 Nigeria is being held hostage by a band of nomadic,
marauding, gun wielding herdsmen who sack whole
communities, invade churches to gun down priests
and worshipers; and kill villagers for fun. These
chaps are terrorists.
President Buhari’s condolence messages » will no longer
assuage or suffice. The full weight of the nation’s security
forces should be brought to bear on these murderers and
cowards without further delay.

On Tuesday, April 24, 2018, killer herdsmen invaded
» Ayar-Mbalom village of Benue State, made for a Catholic
church where worshipers had converged to bury a loved one,
and gunned down two priests and some 17 worshipers.

On Thursday, April 26, 2018, killer herdsmen invaded another
church in Logo local government area of Benue state and
killed 7 » . A primary school was also razed by the rampaging
herders.

In two days, herdsmen killed over 20 persons in one State.
Herdsmen have probably murdered some 500 persons since
the turn of the year. It’s a jarring, unacceptable state of affairs.
Catholic priests call on Buhari to resign

In the wake of recent herdsmen attacks, the Catholic Bishops
Conference of Nigeria (CBCN) called on President Buhari to
tender his resignation.
In a communique signed by CBCN’s president, Most Rev.
Augustine Akubeze and secretary, Most Rev. Camillus Umoh,
on Thursday, April 26, 2018, the CBCN said:
“Since the President, who appointed the heads of the nation’s
security agencies has refused to caution them even in the face
of the chaos and barbarity into which our country has been
plunged, we are left with no choice but to conclude that they
are acting a script that he approves of.

“If the President cannot keep our country safe, then he
automatically loses the trust of the citizens.
“He should no longer continue to preside over the killing fields
and mass graveyard that our country has become.
“Repeated calls from us and many other Nigerians on the
President to take very drastic and urgent steps to reverse this
ugly tragedy that threatens the foundation of our collective
existence and unity as a nation have fallen on deaf ears.
“It is clear to the nation that he has failed in his primary duty of
protecting the lives of the Nigerian citizens. Whether this failure
is due to inability to perform or lack of political will, it is time
for him to choose the part of honour and consider stepping
aside to save the nation from total collapse.”

Buhari has to go hard or go home
While we won’t go as far as asking the president to resign on
the heels of incessant killings by herdsmen in Benue, Taraba,
Plateau, Kaduna, Nasarawa and elsewhere, the statement
from the Catholic bishops accusing Buhari of not taking “very
drastic and urgent steps to reverse this ugly tragedy that
threatens the foundation of our collective existence”, is right on
the money.

The primary purpose of government is to secure the people.
Buhari has to do more than direct a recalcitrant Inspector
General of Police to relocate to the middle belt. At the
moment, Nigeria is at war with killer herdsmen or invaders
from Libya (or wherever). »
When a group of brigands take to killing civilians on a whim, it
becomes clear that the rules of engagement should no longer
apply.
What is required in the middle belt and Benue trough is a
deployment of soldiers around border towns and
communities. What is needed to tame the killers is an all guns
blazing, bare-knuckled approach. Boots on the ground, if you
would.

These killings have been going on for far too long for the
presidency not to have a handle on things.
Terrorists, not cattle farmers
There is a school of thought that says these killers aren’t even
pastoralists in the truest sense of that occupation. Which
implies that we now have another insurgency on our hands
aside the Boko Haram menace. We have to nip this madness
in the bud before it becomes full blown.

I expect Buhari to deal with these herders the same way he’s
been dealing with Boko Haram. We are past the stage of
pretending that these killers aren’t terrorists. They are. We are
past the stage of handling these herdsmen crisis with kid
gloves or calling the herders some of us. They are not.
These herders are bloody murderers. They are the very scums
of the earth!! They are blood thirsty scoundrels and nihilists.
President Buhari swore to protect the people of the federal
republic of Nigeria. Well, at the moment, he’s doing a very bad
job of that and he hasn’t got that much time left to fix this.
»