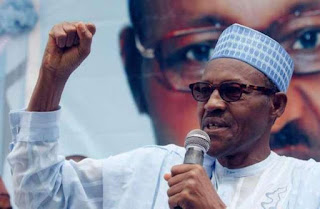 President Muhammadu Buhari yesterday publicly confirmed
his intention to seek a second term in office in next year’s
presidential elections, recalling that he had contested for
the nation’s plum job several times in the past but lost.
This happened at the Abubakar Tafawa Balewa Stadium in
Bauchi, the Bauchi state capital, where the President, who is
on a two-day official visit to the state, addressed a
mammoth crowd.

Recall that the President had about a fortnight ago before
departing to London ahead of 2018 CHOGM told the
National Executive Committee members of his party – the
APC – that he would be seeking re-election in 2019.
The President’s declaration was announced by Governors
Simon Lalong, Nasir El-Rufai and a presidential aide.
Confirming his decision to seek re-election, Buhari told the
Bauchi crowd, “When I came into power as a military Head
of State during the military era, there was nothing like
insurgency in the North East, although I re-contested several
times during the democratic era and lost. I contested again
in 2015 and God in his infinite mercy, gave me victory.
“I have already made my intentions known to Nigerians that
I will still contest again in 2019 and I’m happy for the
support you are already giving to me today,’’ the President
told the people.

An Open Letter to Every Man who Wants to Re-grow
Hair, Cure Baldness and Severe Hair Loss in 14 Days!
He said further, “I contested election for the first time,
second and third times, but lost. I said good and contested
election again for the fourth time and won. I am telling you, I
am going to contest election again for the seat of president
and I will win because I have never been found wanting.
“I served as a president, governor and chairman of
Petroleum Trust Fund (PTF), but never looted the treasury
like Nigerian past leaders, who own 20 to 30 houses, while
some Nigerians cannot afford one room to sleep in.”