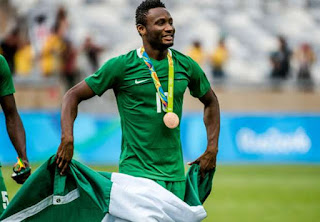 Super Eagles captain, John Obi Mikel, has stated that Gernot
Rohr’s men can make history in Russia 2018 World Cup.
The 31-year-old stated that the three-time African
champions will surprise the world by going farther than any
Nigerian team had previously gone in the competition.
Nigeria’s best placing in their previous four appearances at
the World Cup was the second finish in 1994, 1998 and 2014
and Mikel is confident that the present team will surpass
that record.

“I think we are in a group where we can do something. It
depends on our preparations and how much we want it, not
just we have qualified let’s just go and play the World Cup.
”We want to make history, we want to do well. We want to
make sure we go there believing we can beat Argentina,
Croatia and Iceland,” Mikel told FIFA World Cup Russia
Magazine.
Nigeria will face Croatia in their first group match at the
2018 World Cup at the Kaliningrad Stadium on Saturday, 16th
June, ahead of their games against Iceland (Volgograd,
22nd June) and Argentina (Saint Petersburg 26th June) in
Group D.