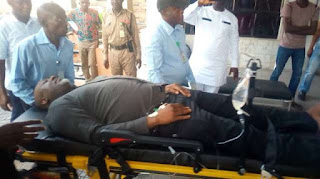 An ambulance brought the lawmaker into Zankli hospital
around 4:25pm.
Kogi lawmaker, Senator Dino Melaye » , has been
rushed to a private hospital in Abuja after sustaining
injuries from his attempt to stop police officers from
transporting him to Kogi state on Tuesday, April 24,
2018.

The lawmaker had been arrested earlier on Tuesday by
operatives of the Special Anti Robbery Squad (SARS) in Abuja
and was being transported to Kogi when he reportedly
jumped out of the moving vehicle » which led to the injuries.
According to a report by TheCable, an ambulance brought the
lawmaker into Zankli Medical Center in Mabuchi district of
Abuja around 4:25pm, after which he was admitted into the
emergency unit.

Melaye was previously wanted for questioning over his alleged
involvement in a case of unlawful possession of prohibited
firearms.
After criminal suspects Kabiru Saidu , a.k.a Osama , and Nuhu
Salisu, aka Small , were arrested at Ogojueje in Dekina Local
Government Area of Kogi on January 19, 2018, they confessed
to the police that Senator Melaye hired them to cause unrest
in the state ahead of the 2019 general elections.
The suspects revealed that the lawmaker handed them a bag
containing one AK-47 rifle, two pump action guns and the
sum of N430,000 to recruit hardened troublemakers and
unleash mayhem in Kogi.

Despite police authorities extending several public invitations
to the lawmaker asking him to come in and answer questions
about the allegations at its Kogi command, he refused to
honour the invitations » , alleging that the police was
colluding with the Kogi State government to cause him harm.
He was officially declared wanted by the police on March 28,
the day he was due to be arraigned in court over the charges
of criminal conspiracy and unlawful possession of prohibited
firearms alongside Osama and Small who escaped from their
prison cell. Both of them were rearrested before April 1, but
the lawmaker refused to honour the invitation from authorities
unless the questioning was transferred to the Abuja
command.

Melaye was arrested by the Nigeria Immigration Service
(NIS) » at the Nnamdi Azikiwe International Airport, Abuja,
while he was on his way to Morocco for an official
engagement on Monday, April 23.
According to the police, the lawmaker snatched his seized
international passport from NIS operatives and retreated to
his house in Maitama, Abuja, where police officers later laid
siege into the early hours of Tuesday. Early on Tuesday, he
announced his decision to finally accept the invitation and
surrendered.

The lawmaker surrendered to officers on Tuesday morning
and was taken to the SARS detention facility located opposite
the old Central Bank of Nigeria, CBN junction along the Area 1
expressway, a detention facility reputed to house hardened
criminals.
In a statement signed by the Deputy Force Public Relations
Officer, Aremu Adeniran , in Abuja, he said Melaye
surrendered himself to officers to “answer to criminal
indictments levelled against him in a case of criminal
conspiracy and unlawful possession of prohibited firearms,
kidnapping, armed robbery, murder, political thuggery and other
violent crimes in Kogi state.”

After his arrest on Tuesday, media reports indicated that
Melaye would be transported to Lokoja, Kogi’s capital, to be
paraded with other suspects who are involved with him in the
case.
However, the lawmaker has always said he fears for his life in
his home state because of an alleged plot by Governor Yahaya
Bello to destroy and possibly assassinate him.