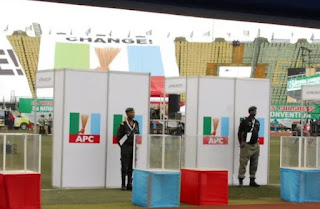 The Benue State chapter of the All Progressives Congress,
APC, has denied importing thugs during the recent caucus
meeting in Otukpo area of the state.
DAILY POST reports that no fewer than six persons were
feared killed and several others injured after fight broke out
during the Benue South caucus meeting held in Otukpo on
Friday.

Report had it that fight broke out between some boys
believed to be loyal to the current chairman of the party in
the state and a senatorial aspirant, leading to the death six
persons, including one Pastor Sam and several other
persons badly injured.
The party in a statement by its Director of Publicity, Apeh
Peterhot, said the report of APC chairman, Abba Yaro
parading thugs during the meeting was untrue and should be
discarded.
His statement reads in full.
“I want to state categorically without mincing words that
Prince Abba Yaro, unlike other cynical politicians, does not
parade thuggery at political rallies. As a law abiding citizen,
the State Chairman of our party attended the meeting with
only his official Police Orderly as his security.

“Let me equally state here once again that there was no
fracas at the venue of the meeting throughout the period of
the caucus meeting.
“It is therefore clear that the rumor is fabricated by some
disgruntled recalcitrant elements who are idling away in
pains over the successes being recorded by our State
Chairman, Abba Yaro, ahead of the Congress billed to
commence on May 2nd, especially after being adopted and
endorsed by the Zone C Caucus of the party.

“However, according to the report from the Zonal Chairman
of the Party, Hon. Hassan Mohmmad, the shooting that led
to the death of one person around the APC Zonal office in
Otukpo as reported by the Police, may have come on the
instruction of one Senatorial aspirant, an incumbent House
of Representatives member -Hon. Hassan Saleh and the
honourable Minister of Agriculture, Chief Audu Ogbeh, and
their co-travelers who were enraged over the endorsement
of Comrade Abba Yaro for a second term in office.

“According to the information, immediately after the Zone C
APC Caucus meeting, Chief Ogbeh, Hassan Saleh and their
co-travelers called for another meeting at a hotel few
meters away from the APC Zonal office at Otukpo. It was
alleged that it was from the meeting that the thugs
emanated to carry out the barbaric act on our supporters
who were jubilating at the zonal office of the party.

“It is devastating that some politicians who are relatively
unknown at the grassroots level would, out of their parochial
interest use our youths against each other in such manner.
“We urge the Police and other security agencies to live up to
their task over this wanton killing of our innocent youths.
And we called on our supporters and fans to remain calm
even in the face of this unhealthy challenge. While,
reinstating our trust in the security agencies.

“On behalf of our State Governor, Dr. Samuel Ortom, we
welcome our dear President Muhammadu Buhari (GCFR)
back to the country after days away in his efforts to put our
dear nation on glorious paths amongst comity of
international communities. We pledge our loyalty to Mr.
President and declare our unalloyed support for him ahead
of the 2019 general elections.”