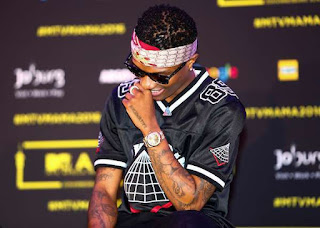 Wizkid is the top striker of the music industry’s
finest talents. The singer has not only dominated the
local scene but he has also enjoyed global
recognition and he is not done yet.
Despite been heavily criticised for his failure to attend the
recently held Coachella Festival, the Starboy CEO has a large
following due to his consistency in dropping hit records and
flying the Nigerian flag high internationally.
Ayo ‘Wizkid’ Balogun took the story of ‘Ojuelegba’ , the place he
grew up in the heart of Surulere, Mainland area of Lagos
State, and sold it to the world, winning major awards and
performing at some of the biggest stages around the world.
With two solo albums, the Sounds From The Other Side EP
released under Sony Music and crucial co-signs from artists
like Drake , Wale and more, Wizkid has proven to be the leader
of the new school and the likely candidate in making Nigerian
music have a firm imprint on global charts.
In arriving at this level, the singer has had to impress with a
retinue of hit records and here are the 10 most essential of
the lot that has helped shaped the trajectory of his career thus
far.

1. Ojuelegba – 2014
Off his sophomore album is the life changing record,
Ojuelegba . The fifth track off Ayo which was written by Wizkid
and produced by Legendary Beatz tells the inspirational story
of his hood, his struggles growing up as an upcoming artiste,
the prayers of his mum and his journey to the top.
Ojuelegba peaked for many weeks at the top of charts all
around the world, was ranked number 12 on the list of 107
best songs of 2015 as compiled by Fader , earned him major
awards with an official remix featuring UK rapper Skepta
alongside Canadian artist, Drake .
Also Read: Starboy is working on new album »
The song is critically and commercially regarded as a classic
and is the most defining moment in his career.

2. Holla At Your Boy – 2010
While ‘Ojuelegba’ is the song that sealed Wizkid’s legacy locally
and globally, ”Holla At Your Boy” was the first single off his
debut studio album, ”Superstar” , that broke Wizkid into
mainstream recognition.
The song which was produced by DJ Klem of Knighthouse
earned Wizkid several nominations including the Next Rated
category at the 2011 edition of the Headies Award, which he
won and has gone on to fulfil the prophesy of his lyrics.

3. Don’t Dull – 2010
Barely few days left to the end of 2010, Starboy dropped a
new single » for the festive season and it became one of
the biggest songs in the following year.
Produced by Samklef, ‘Don’t Dull’ was Wizkid shedding every
gown of that young newbie and becoming a bonafide industry
superstar.

4. The Matter – 2013
UK based producer Maleek Berry had recently popped up on
the Nigerian radar and he teamed up with Wizkid to deliver
this heavy tune that was to set the pace for other hit records
all through the year.
With the video shot in UK going viral, Wizkid created a smash
single that still gets the crowd going at any event today.

5. One Dance – 2016
Off Drake’s award winning fourth studio album, Views is the hit
single, One Dance .
The duo had been involved in couple of collaborations since
Drake jumped on the remix of his ‘Ojuelegba’ single and
eventually led to this joint, which clocked at Number one in
fifteen countries and topped the US Billboard charts for 10
consecutive weeks.
Even though Wizkid’s full verse was not included in the final
release, his vocals can however be heard on the track and he
is credited as being involved in the writing and production of
the song, which earned him 3 Billboard awards and an ASCAP
award.
One Dance helped in spreading Wizkid’s name globally and
becoming a more prominent act on the international scene.

7. Come Closer – 2017
Released as a third single off his STFOS project, Come Closer
features Canadian rapper and Grammy award winner,
Drake » .
The single peaked at number 58 on the UK singles chart and
number 54 on the Canadian Top 100 becoming his highest
single as a solo artist on the charts.
Come Closer was the trilogy in terms of collaboration between
the duo following Ojuelegba Remix and One Dance and the
song earned him several awards including a nomination at the
Soul Train Awards .

8. Beat of Life (Samba) – 2012
Producer Sarz had laced this beat and he claimed that no
artist seemed to be able to do justice to it till Wizkid jumped
on it.
Wizkid gave life to the high octane instrumental, and the
result was a classic dance tune that caught like wildfire
around the country.

9. Dance For Me – 2013
During his time with the Empire Mates Entertainment (E.M.E),
the label put up a collective album tilted ”Empire State of
Mind”, and this was one of the smashing singles from the
project.

10. Azonto – 2013
Azonto is derived from a popular dance movement in West
Africa, originating in Ghana.
The dance which involves traditional African moves like knee
bending and hip swaying, combined with wild, complex hand
movements that supposedly mimic everyday activities, had
gone viral across Africa and Wizkid jumped on it in his own
way.
Wizkid’s Azonto version soon made it to the top eight non
American summer song of 2013. It was the only song by an
African on the Top 10 according to American online site,
FeedBuzz.