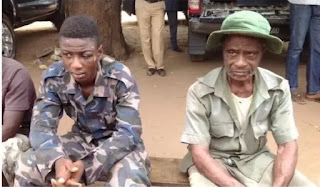 An 18-year-old Junior Secondary School II pupil has
been arrested by the police in Benue for alleged
involvement in armed robbery
– The pupil, Atoo Aondoana, was said to have
participated in an armed robbery along Makurdi-
Alaide highway in Benue
– An elderly cleaner, Peter Aghande, was arrested with
the suspect for being an accomplice
Police in Benue have apprehended a Junior
Secondary School II pupil, Atoo Aondoana, for
his alleged involvement in an armed robbery
along Makurdi-Alaide highway of the state.
Arrested with the suspect was an elderly cleaner,
Peter Aghande who was said to be an
accomplice. The accomplice works with the
Nigeria Air force in Makurdi.
It was noted that Aghande is being held for
supplying the military uniforms used for the
robbery.

The 18-year-old suspected robber in military
uniform, who lives with his father, admitted to
the crime. He was said to have confessed that he
bought the military uniform from someone.
He said: “We carry hunting guns for operation but I was
not arrested with a gun. I had no weapon on me during my
arrest. I’m a secondary school student in JSS2 at
Ikpayongo.
“My father is a farmer and I’m the only child of my mother
who is now married to another man in Makurdi.”
Aondoana said that a friend introduced him to
the robbery gang, adding that he feels bad about
his ill behaviour.

According to the cleaner, the Air force personnel
used to give him bad uniforms to throw away
and the boy begged him to give them to him
rather than disposing of them.
He added: “But, I was shocked by the following day when
I heard that the boy went to rob with it.”

Meanwhile, NAIJ.com previously reported that the
Nigerian army, 82 Division, Enugu, said a naval
patrol team arrested one Abdullahi Yakubu at
Kara, Atani road, Onitsha, Anambra, for alleged
impersonation.
Colonel Sagir Musa, deputy director, army public
relations, made the disclosure in a statement
made available to newsmen in Onitsha.
Musa said that the incident occurred at about 12
noon on April 10, 2017, noting that Yakubu was
at the time of his arrest, dressed in the Nigerian
army camouflage uniform and combat boots.