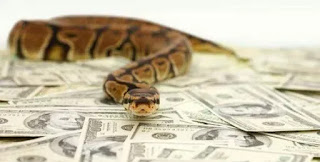 The controversy surrounding the mystery snake that sneaked
into the account office of the Joint Admissions and
Matriculation Board, JAMB, in Makurdi, Benue State and
swallowed N36 million cash seems to be far from over

It had been reported that an account staff, Joan Asen
and a lady outside JAMB allegedly connived to steal the
money “spiritually” through a mysterious snake that always
crawled into the office to swallow the money from the vault.
This development has raised eyebrows and stirred
controversies online as Nigerians have been voicing out their
views.

However, this time around few Nigerian celebrities have
described the report as a mockery of Nigeria as a whole.
Here are some comments:

@Ycee on his twitter page wrote “Lol snake chop money for
jamb office, I swear we are not serious.