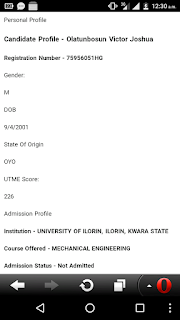 According to the enquiries we made from JAMB officials,we found out that Admission is not yet closed on CAPS but it is advisable that you buy another JAMB form in case it happens otherwise.

As announced by JAMB,1.6 million people are to be admitted for the 2017/2018 admission process.But just 500 000 people have accepted the admission as at the time announced.Therefore it remain 1.1 million people ro accept the admission given.
The deadline given by JAMB January 25th,2018 is just for the submission of list by the institutions to JAMB for approval.Pertaining to admission on CAPS,it has not closed but the process still continues.
Therefore,if you have not been admitted on CAPS do not panic because anything can happen but as said earlier it is advisable to register for 2018 time so as not to loose on both sides.
Also if your course have changed but your admission status still reads not admitted,do not be afraid but be rest assured that you will be admitted.
It is only due to the network problem in uploading the information n CAPS.
Moreover,if your CAPS still reads admission in progress,be also rest assured that you will be admitted.
Finally,we urge every candidates to start lecture in their prospective institutions as lecture have started and examination will soon start.
We wish you all success in your endeavours.
Share this post using the share buttons below to ease the end of others{Facebook,email,google+}
You can also comment your view on this using the comment section below.

One thought on “IF YOUR CAPS STILL READS NOT ADMITTED,READ THIS!! ITS IMPORTANT”